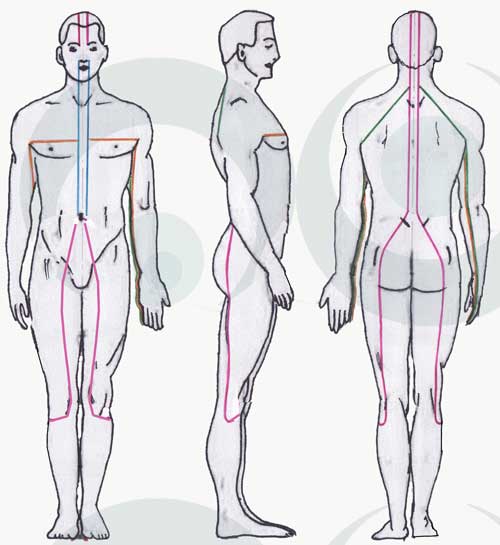 Connected to the process of respiration. The SEN is also applied in the case of headaches (moon channel in the evening hours and sun channel during the day). Also, since it runs through the Trapezius and Infraspinatus muscles, it has strong indication with shoulder and neck pain. Its is also useful for mucus build-ups in the nose, coughs and colds, chills and fevers.  Around the Abdominal area, it runs over trigger points of the Rectus Abdominis and, therefore, helps with relieving a complete set of digestive issues that occur due to this.

The line starts at the belly button travels across the Inguinal crease above the Femoral artery and then goes between the intermuscular septum of the Vastus Medius and Rectus Femoris. It crosses the knee but then climbs back along the Biceps Femoris and across the Glut Maximus passing over the Sciatic Notch.

Further, it climbs to Posterior Superior Iliac Spine and up the Longissimus Thoracis to reach the neck. It then runs along the Spinalis Capitis muscle crosses the fascia of the Scalp to arrive at the eyebrows.

Originates at the Navel and moves up in a straight line across the sternum to the nostrils.

Minor 2: Starts from Minor Line 1 at the level of the 4th Rib to run across to the Armpit along the inner side of the arm to reach the Ulnar side of the palm.

Application: First Outside Line and third outside line of the leg. On the back the first line of the back. On the upper Arm, it is the interior line of the arm.
Myofascial Meridian: Superficial Front line in the Front and superficial back line on the spinal area

Helping people in pain is easy!

Thank you! Please check your email and confirm the newsletter subscription.